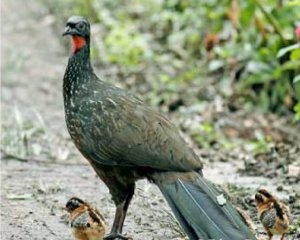 I think my husband has finally lost his mind. I’ve always known that he was a rather eccentric fellow, but this has gone too far. His newest obsession is coffee. He custom orders beans from some place in South America and then roasts them himself in our newly acquired coffee bean roaster (something every home should be purchasing in the midst of economic crisis).

His latest purchase is called “Jacu bird coffee.” It is from South America and has, supposedly, a very earthy, delicious flavor. The reason for its exceptional flavor is that the Jacu bird apparently eats the ripest most flavorful coffee beans and then excretes them after they pass through its intestinal tract. (I am not making this up.) The beans are then collected, cleaned (well, thank the lord for small favors), and distributed to roasters like my sick husband.

His logic may be right and the beans, after prolonged roasting at over 240 degrees, may actually be clean of all damaging bacteria carried in the bird’s excrement. But can you say “GROSS!!!!”

Naturally I have refused to drink the distasteful java. But I’m concerned that he may lure me into partaking of the tainted brew by not telling me the whole truth one morning.

How is a relatively sane wife supposed to cope with a man like this? More importantly, why would he reveal the details of this disgusting concoction if he actually wanted me to drink it? Ah ha, maybe he doesn’t really want to share this new acquisition with me. Maybe he really wants to hoard it all for himself. Maybe this is an even bigger issue than I originally imagined.

It’s a good thing we’re apart for a few weeks this summer. I can contomplate the coffee issue in depth as I relax on the deck of our rented California cottage sipping a safe and delicious cup of my favorite Dunkin’ Donuts dark roast.

2 responses to “The dreaded Jacu bird”