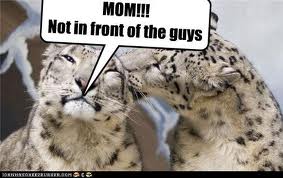 The laws of nature require moms to embarrass their sons

It’s a funny memory actually. My father was my best friend, my compadre, my confidant. Until about an hour ago, I would’ve sworn I idolized him every moment of my childhood. And now that he’s gone, he’s even stepped up to saintly status in my recollections. But there was this one thing he did that made me recoil with embarrassment. He tried to hold my hand in front of people. It was awful.

I remembered this today because when I went to pick up my boys after school, I was haltingly rebuffed by my soon to be 11-year-old son as I innocently reached for his hand on the way to the car. At first I told myself it was one of those inadvertent brush offs. You know, like he was swinging his arms and didn’t realize I was actually reaching for his hand. So I reached out more deliberately the 2nd time. That’s when I knew the truth. He wanted nothing to do with me. It was awful.

I then did something I thought I’d never do. I reached my hand towards his, grabbed it and held on as tightly as I could. He shuddered. He squirmed. He desperately tried to slither out of my grasp. But I held on for dear life, like a Titanic victim clutching a life raft.

“What?” I asked innocently. “Something wrong? You seem…agitated.” I offered a broad, cheerful smile along with my observation.

“Mom.” he finally wrenched his paw out of my clutches. He smiled back, cognizant of my unwillingness to peacefully put up with his growing independence.

It was then that I remembered dear old dad doing the exact same thing to me. He used to do it all the time. He’d try to trick me into grabbing his hand while I crossed a busy street. But he’d never release his grip once we were sidewalk born. He thought it was funny to see me wriggle with awkwardness as my peers passed by us hand in hand. I didn’t share his sense of humor at the time.

However, I suddenly was finding this quite laughable. I teased my son by grabbing his sleeve, then his elbow, then finally his leg in a move reminiscent of Harpo Marx. By this point he too was snickering. “Cut it out,” he chastised. “I mean it.”

Shamefully reprimanded, I did pull back and stop trying to win him over. This was clearly a rite of passage with which no parent should interfere. The laws of nature rule that boys will cease holding onto their mothers the same as girls need to let go of their dads. At least for a few years.

I’m not sure when it became okay to hold my dad’s hand again. I’m pretty sure it was after college sometime. Maybe it was after my first marriage fell apart and I felt the loneliness of the world on my shoulders. Or maybe it was after he got sick and I realized he wouldn’t be around forever. Guess it doesn’t much matter when it happened. It did. And we did hold hands again…at least for a little while.

4 responses to “I wanna hold your hand…”

Leave a Reply to Deborah the Closet Monster Cancel reply