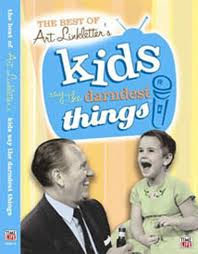 It’s my worst nightmare. On the way home from school today, my 11 year old son, Levi, asked me the standard question I usually pose to him. “So mom, what did you do that was interesting and exciting today?” “Not much,” I replied. It was a slow day. I had run errands, sent out a few query letters on a new script I was hoping to sell, worked out. Then it was time to pick up the boys. I guess I felt somewhat disappointed in myself when I took mental inventory of my day. But it wasn’t until my 7 year old, Eli, piped up that I truly plummeted into the abyss.

“She did nothing. Like she always does,” he said in a cheery, non-judgmental tone. He was simply stating a fact, as he knew it. I was crushed. Memories of my tween pals and me sitting around after school lamenting the uselessness of our stay-at-home mothers flooded my memory banks. Pay-back really is a bitch.

I’ve spent my whole adult life trying to show myself and my children that women count, that motherhood is not a straight path to uselessness, that I can be there for my kids and still have a productive, meaningful career. I’ve accepted the fact that I don’t make nearly as much money as I did before embarking on the motherhood track. But money isn’t everything, is it? My husband constantly insists that we are co-earners; that without me doing my part to manage our home and children, he wouldn’t be able to go to work every day and earn exponentially more than me. “I am the glue that holds this family together,” he asserts.

But right now I feel more like goopy, home-made paste than super strong duel pump epoxy. I want to scream “I am not my mother,” at the top of my lungs. And I love my mother. I really do. I just didn’t want to make the choices she made. I wanted more. I was part of the “have it all” generation of women who grew up believing we could work, love and parent simultaneously, without ever missing a beat. It was a rude revelation to wake up at 35 and realize we were sold a bill of goods; that no one can have it all, that growing up meant making choices, choices that we would have scoffed at when we were young, single and full of potential.

The whole thing makes me angry. I’m angry that Eli sees me as a loser who doesn’t do anything all day long. I’m angry that maybe he’s right. I’m angry that if I got one acceptance letter from a reputable film studio I’d suddenly feel like I existed again. I’m angry that I spend countless hours writing stuff I’m really proud of that never sees the light of day. I’m angry that men get to go to work at some remote location, while women, even in 2011, are still primarily responsible for maintaining the home and managing the family, whether they work beyond the confines of their homes or not.

All I’ve ever wanted was for my kids to be proud of who I am. I never wanted them to see me as merely an off-shoot of themselves, a gelatinous being who only existed to meet their ever-changing needs and demands. And yet, try as I have, that’s where I netted out. It’s more than a little depressing.
My husband insists that being there for our boys, sharing in their daily travails, listening to theirs tales and troubles is all that life is really about. Often I believe him. But sometimes it’s hard not to wonder about all we women walk away from when we choose the road to maternity.

I heard the biographer of Steve Jobs on some news show the other day. He said he asked Jobs on his death bed, why, after so many years of reclusive isolation, he finally wanted to tell his life story. Jobs answered that he wanted his family to know who he was. Sort of astonishing. Jobs was so busy changing the world that those closest to him hardly knew him at all.

Sometimes I think life is one of those no-win situations. I guess Steven Wright was correct when he said, “You can’t have everything. .. Where would you put it?”