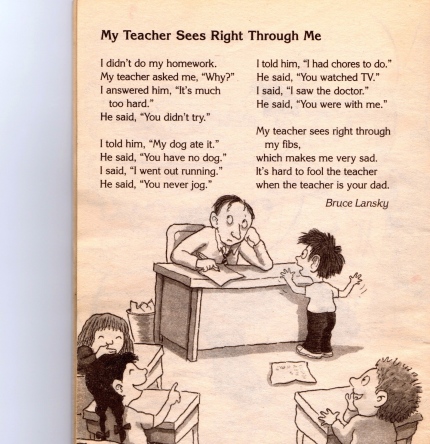 Being a parent sucks! I’m serious. Why can’t we just love our kids, play with them and have fun? Instead we have to teach them lessons, watch them suffer, and worry about them every waking moment. It simply is not fair!

Today is a bad day. I open a big show tonight. It’s been a grueling few months. I’m tired, strung out and full of anxiety about the performance. So my adoring spouse decided to let me sleep in and drove the boys to school this morning. On any other morning I would have been thrilled. But when I awoke around 9am and stumbled into the kitchen for a much needed double espresso, I discovered a sight so horrific, I wanted to crawl back under the covers and never emerge again.

You see, there on the counter, all ready for transport, sat my 8 year old son Eli’s painstakingly created diorama and all the accoutrements of his poetry project that were due today. My heart sank. He has worked so hard on this project it’s unbelievable. This was an injustice I had to make right.

I threw on some clothes, grabbed the diorama and poems and ran out to the car to rescue him. But there was a hint of doubt filtering through my mind that I couldn’t quite shake. Of course I was doing the right thing by bringing him the project. Wasn’t I?

I called my husband at work. “Just wanted to check in on what went down this morning. It looks like with you driving the boys and the change in the routine, Eli forgot his poetry project and I know they’re presenting them today,” I could hear the guilt in my voice even as I tried to sound neutral. “So, I’m just gonna swing by and drop it off for him.”
Silence. “OK?” I added beseechingly.

The icy voice on the other end of the phone chilled me to the core. “No. Don’t bring him the project. He has to learn from this. If you go running to school to save him, this entire painful experience will have been for naught.”

“But it really isn’t his fault,” I clamored. “If I would have taken him, I would have made sure he brought the project. Don’t you think this is an extenuating circumstance?”

“No, I don’t,” my husband cooly replied. “Debra, this is a perfect lesson in taking and owning responsibility for himself. Don’t rob him of it.”

“But…but…but…” I couldn’t get the words out. “But he’s only 8! And he must be devastated,” I could hear my sobs backing up in my throat.

“But he wont forget his school work ever again if we let him learn this lesson,” my husband countered. “Besides, you don’t have to see his broken-hearted expression in your mind every day for the rest of your life. I do. It’s brutal.”

So I came back into the house, replaced the diorama on the counter alongside the poetry book, and tried not to feel like the worst parent on the planet. But it’s hard. I believe so firmly in the “Love and Logic” approach to parenting in which we are engaging. I see my friends with older kids, and I know that the lessons grow ever more complex and challenging as kids grow up. Learning personal responsibility today could very well save a child from making a really bad decision when he’s older; and the truth is that the stakes get incredibly high as kids get older.

I’ve asked most of my friends whether they think I did the right thing. Most of them say yes, but they add that they would never have done it themselves. That makes their tacit nod of approval feel like condemnation of the highest form. I guess we’ll just have to walk this path alone and stay true to the principles of natural consequence in which we believe.

But, just in case you feel compelled to comment and tell me that I did the right thing, feel free. It might help me sleep a bit easier tonight. But no pressure.

6 responses to “Believe me it hurts me more than it hurts you!”