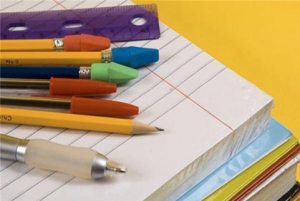 Ah, shopping for school supplies. Is there anything…worse? It is truly one of life’s most horrible experiences. First of all, why do they need so damn much? I mean, honestly, are they really gonna use one pencil a week for the next 36 weeks? That’s a lot of lead. Isn’t that like bad for the environment or something? To add insult to injury, one mom I know told me that she had to individually write her kid’s name on each and every pencil. I thought she was joking. I mean, please. Have we resorted to purchasing pricey designer number 2 pencils nowadays? Who gives a crap if your kid uses the wrong pencil? And the stuff really adds up fast. It was probably wrong to tell my son he could have the Mario Wii game if we netted out at under $100. His subsequent tantrum was rather embarrassing I must admit. After he composed himself he looked at our $160 stash and said, “School costs enough. I think the teachers should just buy all the school supplies themselves and give them to students.”

Of course I used that as a teachable moment to launch into a diatribe about the shattered state of education in the country (and particularly within our own state confines) and shared with him the rather disturbing fact that Nationwide, teachers earn a whopping .88 for every dollar earned by those in “comparable” positions.* This might have gone over my 9-year-old’s head.

But back to the chaos of the school supply aisle. It reminded me of Passover shopping on Devon Avenue at Hungarian when I was a little kid growing up in Chicago. (While this image may only be accessible to a few of you, it is such a perfect analogy that I had to include it.) Only instead of large Jewish women with short, complacent husbands body checking me in the macaroon aisle, here we had hordes of over-privileged children violently grabbing the last few packs of sharpened pencils, staplers and highlighters with absolutely no regard for personal space, safety or courtesy. And their parents were even worse.

One lady literally raced me to the dry-erase pen section after I foolishly pointed out its whereabouts to my dazed son who’d been up and down the aisles three or four times without spotting them. She took the very last package of pens. “Um, excuse me,” I politely announced. “My son was on his way over to get those. I believe you heard me direct him to this section, and then you ran over here before he could get here and took the last package of pens. Don’t you think you’re being a little too competitive?”

“Hey,” she smiled with self-satisfaction, “You snooze, you loose.”

I thought about smacking her upside the head.

But then I decided that her husband was probably a personal injury attorney, (no offense, Barry), and that she’d end up suing me for like 18 million dollars because I somehow managed to puncture her breast implant while attempting to kick her in the teeth. It just…wasn’t worth it.

For a brief psychotic moment I thought about taking both of my children to purchase their school supplies at the same time. But, seeing as I’m organizationally challenged and probably undiagnosed ADHD, the image of myself hopelessly trying to follow two diverse lists, while fighting off insurgent parents and checking off appropriate list items as they landed in my cart was a little too much for me. Instead, I made it a “fun” mommy and me outing for each child individually, complete with a post shopping trip to the local fro yo shop.

While the signature tart, fat free, icy treat (that I insisted in smothering with Heath Bar sprinkles) did help to somewhat lessen the post traumatic stress reaction I was experiencing, truth be told, it barely took the edge off. What I needed was a Ketel One, double Martini, not too dry, just a little dirty if I was to go home and return to the battle field with child number two.

Luckily it was too close to bedtime to play out the second half of this cutthroat educational acquisition competition. We tabled it for the night. But let me tell you, come tomorrow morning, I am gonna be a force to be reckoned with. So if you see me coming down the aisle, accordion folder in hand, please, for the love of God, get the hell out of my way.

*Incidentally, “comparable” positions according to the report by the Editorial Projects in Education Research Center (EPE) includes reporters, insurance underwriters, and even museum curators to name a few. The report also noted that it is, in fact, teaching quality that matters more than anything else in a child’s education, and astutely added that a child’s likelihood of succeeding in life depends greatly on which state he or she is born into since education varies so erratically from state to state.

My six year old son, who happens to be what we in the mom profession call a “triple threat;” smart, willful and extremely manipulative, told his teacher the reason he misbehaves is because his body wont do what his brain asks of him. This response set off a flury of attention. “Children don’t say things like that unless there is something very wrong.” They advised nervously.

I’m not living in denial or unwilling to see my kid’s flaws. Honestly, I’m such an obsessively self-analytical creature (which extends to my offspring as well), that I think I’m the first person to point out and try to fix their imperfections. But his teachers see his disruptive behavior and subsequent brain/body response as proof of some serious psychological impairment. They want me to have a full neuro-psych evaluation – only $1500 (not that money matters when you’re talking about your kids). I said in his defense, “Look, he probably heard someone say that. He says a lot of weird stuff.”

“Well,” counseled the experts, “Most 6 year old boys do not say a lot of weird stuff.”

Do you ever feel like you just can’t win?