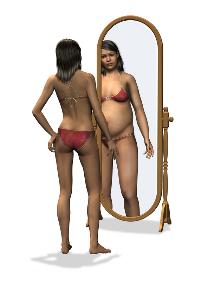 I have what’s commonly known as “body dysmorphia.” Well, I don’t know how commonly known it actually is. It’s really called “Body Dysmorphic Disorder.” I looked it up. Here’s what it said, “Body dysmorphic disorder (BDD) is sometimes referred to as dysmorphic syndrome. It is a psychological disorder in which the affected person is excessively concerned about and preoccupied by a perceived defect in his or her body image.” Does this not apply to everyone?

But wait, there’s more:
“It is estimated that 1–2% of the world’s population meet all the diagnostic criteria for BDD” Is that all? I find that hard to believe!!! Every woman I know over 40 has this. Seriously, I’m not making light of this because I really do have it.

I am and always have been convinced that I am HUGE. I’m not joking. When I look in the mirror, I see a fat woman looking back at me. Now over the years, with a tremendous amount of drugs and counseling, I have come to understand that my perception of myself is not the same as reality. I also understand (although this part is harder for me to believe) that if I surveyed 100 people who knew me, few if any would describe me as portly.

This is a challenging disorder to cope with. Shopping, for instance, is impossible. I spend all this time picking out size 16 capris and extra large tank tops, and then I put them on and think “Wow, I look pretty hot.” Then I get home and my husband is like, “What were you thinking? You look like a small child who just raided her mommy’s closet.”

I know what you’re thinking; Freud could definitely interpret that into some kind of wistful maternal longing based on a lack of nurturing from my childhood. But I’m not gonna go there. Anyway, I usually try to take someone with me when I shop these days. It’s kind of like that great moment in “A Beautiful Mind” when Russel Crowe (who has these visual halucinations) asks one of his students if the man who just approached him to offer him a Nobel prize actually exists.
I’ve tried asking salespeople if the billowy blouse I’m unsure of is actually my size. But they’re so eager to sell anything that I’ve yet to meet someone who answers me honestly.

Over the years my husband has gently nudged me towards developing a more fitted wardrobe. I’ve been afflicted with BDD as long as I can remember. In fact, I recall wearing most of my 6’3” father’s clothing throughout much of high school years. I told everyone it was my ode to Annie Hall. But retrospectively I think I honestly believed those clothes were the only ones that I could squeeze my 5’8” scrawny frame into. It’s actually kind of sad when I think about it.

The other day I was talking to this friend of mine who has personality dysmorphia. She honestly sees herself as reliable, reflective, altruistic and uniquely sensitive. She is, in fact, a thoughtless, self-obsessed flake who spends her life ruminating over inane dramas that truly don’t even exist. I realized that body dysmorphia maybe isn’t all that bad. It’s kind of like that famous saying; “I cried because I had no shoes. Until I met a man who had no feet.” Wow, do you think he really had no feet? Or could he possibly have been suffering from BDD?

In any event, I should probably get a new friend.

If you weren’t shocked by this week’s announcement from the Archives of Pediatrics and Adolescent Medicine about one-fifth of American 4-year-olds being obese, I’m not sure what it would take to freak you out. How about the fact that obese kids are developing type 2 diabetes, fatty liver disease and musculoskeletal problems (their tiny bodies can’t handle all that weight)?

I’m not a scientist. I’m not a doctor. But I can add. And by putting two and two together, I’ve come up with a plausible hypothesis as to why 1 in 5 four-year-olds in this country are obese.

Dr. Tom Robinson, from the Center for Healthy Weight at Stanford University School of Medicine, commented in a CNN interview, “It’s a very bad sign if we see obesity at a young age. When we see children obese at age 4, we’re likely to see complications – high blood pressure, abnormal lipids – which can lead to heart disease and stroke…”

Take this research and add another new study by Elsie Taveras at Harvard Medical School that shows that fat babies are at an increased risk of becoming obese toddlers and you can’t help but ask yourself if maybe feeding on demand isn’t such a good idea after all.

I know the story, your baby’s rooting. He’s crying. He’s obviously hungry. Never mind the fact that you fed him 20 minutes ago and your nipples are raw and chafed from these absurdly short feeding intervals. Guess what? Rooting is a natural instinct. It doesn’t indicate hunger. And those tears you interpret as a sign that baby wants more food, they’re probably due to reflux. The fact that your baby stops crying when you feed him is likely because it feels good and temporarily stops the reflux. But wait a few minutes after the feed, and the crying will return. I know you want to feed your baby. It feels right. It feels nurturing. But have you ever thought that maybe you’re overfeeding?

Oh no, not you. You’re certain your pudgy, ballooning babe is healthy and happy. He just has an insatiable appetite. Well, the truth is that research shows that babies who gain a lot of weight quickly in the first 6 months of life, are more likely to become part of that new obesity statistic we cited at the top of this page.

Babies need no more than 20 to 30 ounces of milk (breast or formula) during those early months. If you’re a die-hard “feed-on-demand” proponent, do you know how much milk your infant is actually ingesting in a 24 hour period? And frequency matters also. While it’s unpopular to even suggest regimented feeding periods in most mom circles today, there’s a lot of evidence that supports spreading out feedings by at least two to two and a half hours.

I know, you’ve got to go because the little one’s screaming and it’s time to feed again. So I’ll wrap it up by saying; just think about it. Baby fat may be cute, but it’s also a key indicator of toddler obesity, which leads to a host of other serious health issues. Maybe that whole moderation thing isn’t such a bad idea after all.

Our Wii insists that we’re overweight and chastises us for eating too much. I’m not sure what to do about it. My 8-year-old son is developing a body image complex.

We got this Wii last week. We’re not typically into the whole video game thing. But this is actually a fun way for the family to spend time together. We do yoga, golf, play tennis. We even try our hands at various (mostly impossible) balancing games. But here’s the problem: At the beginning of each session the Wii asks you to take a “body test.” It weighs you and measures your ability to stay centered and calculates your “Wii age.” The first time I did it I was like 54 (which depressed the hell out of me since I’m more than a decade younger). I was only buoyed by the fact that my 42-year-old husband first ended up with a reading of 62. Ha!

Anyway, once you work out every day and get the hang of it, your age goes down rather dramatically and you feel a whole lot less defeated by the damn thing. It also weighs you and if you haven’t lost any weight since your last session, it asks you all kinds of annoying questions like, “Why do you think you’ve gained weight? Are you eating at night?” It’s irritating to say the least. But I can handle the vexing probes. It’s my 8-year-old son who is developing a body image complex.

“Levi,” I answer, trying not to sound alarmed by his anorexic demeanor. “You are 8-years-old and as skinny as a rail. You are not supposed to lose weight. In fact, your job is to eat healthy and actually gain weight as you grow.”

“But the Wii says I should watch my calories and make sure to avoid rich desserts. Mom, I am soooooo fat!”

OK, now I’m officially panicked. Visions of 8-year-old bulimia dance in my head. “Don’t act distraught,” I tell myself. Maybe he’s just trying to get attention. As a previous anorexic myself, I shudder at the thought that somehow I’ve genetically passed my fat phobia on to my son. I make a note to call the “talking doctor” and set up an appointment ASAP.

But then it hits me – like a gift from the heavens. I’ll admit it’s devious, maybe even conniving. But desperate times call for desperate measures.

“Well, then I guess you wont be wanting any of these,” I announce matter-of-factly, as I dangle a bag of triple chocolate Tammy Co cupcakes under his nose.

Suddenly he is my son again. The lure of decadence has freed him from his dieting frenzy. He grabs the bag and dives into the cupcakes unabashedly. Soon he is blissfully covered in velvety chocolate swirls.

“Mom,” he looks up at me with wide-eyed elation, “These are amaaaaazing!”