“Eli, you stink,” I told my 7 year old son the other night. “Did you take a shower this morning?”

“No.” he answered matter-of-factly.

“Did you shower yesterday morning?” I asked.

I was a bit surprised. Eli has been in the habit of religiously taking long leisurely morning showers for almost two years. And frankly, rituals in our house do not terminate easily.

“The day before?” I hesitantly inquired. Then, realizing I didn’t actually want to hear the inevitable negative response, I added, “Never mind. It doesn’t matter. Why did you stop showering in the morning?”

“Well,” he reasoned, “We have to leave so early, and you said I have to stay in bed till 6. I just don’t have time anymore.”

“But, Eli,” I calmly explained, “You still have to shower every day. Look, we’ll talk about this later. Right now you need to go inside and shower and get ready for bed.” It was already 7:30 and we were just returning from a long day and an activity packed afternoon and evening.

“I don’t want to,” he asserted rather obstinately.

“No,” he pronounced. “I’m not showering.” He then grabbed his back pack and started towards the door. “I’m tired. I want to go to bed. I’m going inside.”

“Stop,” I announced sternly. “You may not enter the house smelling like this.” I honestly have no idea how I came up with this. “You either go directly to your room and take a shower or you can sleep outside tonight.”

Then came the tears, the hysterics, the throwing of water bottles, karate gear, backpacks. But I stood my ground. “Sweetie,” I said with as much warmth and compassion as Sandra Dee, “You can wait by the front door. When you’re ready to come inside and shower, just ring the bell and daddy or I will come and let you in.” Then I grabbed the remainder of my groceries, hauled them inside and closed the garage door.

When my husband met me in the kitchen, he naturally wondered where our youngest had disappeared to. I recounted the unfortunate tale and saw to unpacking my Fry’s bags. About 10 minutes later we heard the front doorbell chime. Mark opened the door and let in our dejected, dirt-laden child who marched silently into his bathroom, took off his clothes, turned on his shower and stepped inside. Then bedtime rituals played out as usual.

And the point goes to the parents. In the game of child-rearing, it’s not about who screams the loudest. But rather, it’s about who’s willing to stand their ground and wait it out until their opponent’s willfulness begins to wane. 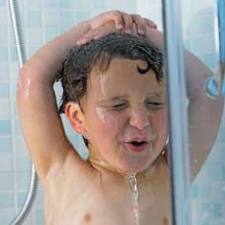