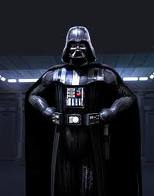 Lots of good Jedi's end up on the dark side

My husband, the Pediatrician, is a genius. No, really, he is. After years of insulting him with my favorite line; “do people actually pay you for this kind of advice?”, I am now going to officially eat crow, or my hat, or whatever it is that people eat in the name of contrition.

Our six-year-old son Eli came home today with a “reflection note.” That’s the equivalent of “getting your card turned,” “striking out,” or any other number of euphemisms for “screwing up in class.” He was beside himself. Made Alexander of the no good, horrible, very bad day look like Polyanna.
“I’m never going back to school,” he whined as he climbed into the backseat of my car. “Why don’t you tell me exactly what happened,” I suggested in the most evenly modulated voice I could muster. “Well, Andrew and I were spitting…” he started. “Okay,” I lost my compusure, “Spitting? At someone? At each other? Why would you do something like that?”

“We just wanted to see where the spit would land by our feet. We weren’t spitting at anyone. We didn’t even get a warning,” he lamented. I have to admit I felt better. At least they weren’t being mean to each other or to some other hapless child.

“Okay,” I offered, “Now you know that spitting is wrong and I very much hope you will never do that again.”

“I wont,” he exclaimed, “Even if Andrew says I should.”

“What do you mean ‘Even if Andrew says you should?’” I asked.

“Well,” he explained, “Andrew is my master. I have to do whatever he tells me to do.”

Okay, panic attack number two. “Your master?” I challenged. I was starting to sweat.

I then tried unsuccessfully to explain about Lemmings or Lemurs and cliff jumping activities. Nothing seemed to penetrate. The horror of thinking my youngest son was nothing more than a follower was overwhelming to me. I suddenly envisioned him, hash pipe in his manacled hands, trying to explain to some apathetic arbiter in a dark civil servant’s office that he only sold the drugs to the innocent kindergarteners because his friend told him to do it.

Luckily, we arrived at the restaurant to meet his father in the nick of time. “There’s Daddy!” I announced with relief. We went in and took our seats. Eli was still pouting heartily. “Would you like to tell daddy what happened today?” I prodded. Eli reluctantly shared his shameful tale. My husband, Mark, frowned and offered the requisite disappointed response. “But that’s not really the issue,” I went on. I then prompted Eli to divulge his friend Andrew’s “master” status. “Whatever Andrew tells me to do,” Eli boasted, “I have to do. Because he’s my master.”
Now this was one of those moments where every bit of wisdom I’d been carrying around in my imaginary parent backpack had mysteriously vanished into thin air. I stared at Mark, hoping that both of us were not being struck dumb at the same moment. His eyes landed on me for a moment and then, without missing a beat, he turned to Eli and said, “Wow. That’s really scary.”

Eli took the bait. “What do you mean, daddy?”

“Well,” Mark went on, fully cognizant that the word “master” had weighty Jedi implications that had alluded me altogether. “You can never be sure if a master is really looking out for your best interests. A lot of masters start out fighting with the force but end up crossing over to the dark side. And the masters who’ve gone over to the dark side will act like they’re your friends, but they may really be trying to get you to come to the dark side. I mean, think about it; Darth Vader, Darth Plagueis, Count Dooku, they all started out in the light. But for whatever reason, they crossed over. That’s why you have to listen to your own heart and do what feels right. You can’t follow a master because you never know where that master may lead you.”

Eli thought about this for a long time. I must admit, I was more than a little impressed with my husband’s seamless spontaneity. If this works, I thought, it may be one of the all time most brilliant parenting maneuvers I have ever witnessed.

“Dad,” Eli asked thoughtfully. “Can I still be Andrew’s friend?”

“Of course, sweetheart,” my husband smiled victoriously. “Just remember, young Jedi; if you follow your own inner voice, the force will always be with you.”