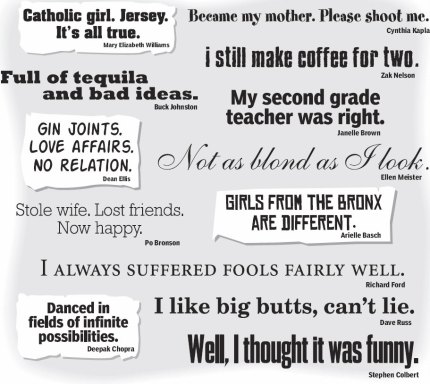 Who are you really, In six words or less?

I was listening to NPR today and they promoted an upcoming segment on writing your own memoir — in six words. The minute I heard it I was hooked. Six words to tell the world who you were, what your life meant. Fascinating. Tricky. Impossible. I became obsessed. It’s like that game we used to play as kids; “If your house was burning down, what three things would you save?”

If you only had six words, who would you be? Can you hone a description of yourself to that fine a point? Without cliche? Without limiting all that you are?

I began to work:

So much laundry, need to write.

Write to live. Mother to love.

Seeking balance — motherhood and self expression.

I asked a friend what his would be. He said, “I would have done it different.” That made me sad.

I kept working. Then I checked out the NPR transcript since I hadn’t even heard the show. Apparently the idea came from “Smith,” the online magazine. Based on the legend that Hemingway once responded to a challenge to write a complete story in six words with, “For Sale: baby shoes, never worn,” They asked readers to tell their life stories in a single sentence. What resulted was a book,“Not Quite What I Was Planning,” by Smith founding editor, Larry Smith and his memoir editor, Rachel Fershleiser.

Here are a few excerpts from the book:

After Harvard, had baby with crackhead. - Robin Templeton

Almost a victim of my family - Chuck Sangster

Then I went back to work on my own. Clearly being a mother was key to my self description. But so was being an artist, an independent creative being. I netted out with this:

What would your six word memoir say?